What is Maca and why is it so important in semen volume production?

The growth habit, size, and proportions of maca are roughly similar to those of the radish and the turnip, to which it is related. The green, fragrant tops are short and lie along the ground. The thin frilly leaves are born in a rosette at the soil surface, and are continuously renewed from the center as the outer leaves die. The off-white, self-fertile flowers are borne on a central raceme, and are followed by 4–5 mm siliculate fruits, each containing two small (2-2.5 mm) reddish-gray ovoid seeds. The seeds, which are the plant’s only means of reproduction, germinate within five days given good conditions. The seeds have no dormancy, as maca’s native habitat remains harsh year-round.

Maca is found wild in Peru, Bolivia, Paraguay, and Argentina. It is primarily cultivated in the central highlands of Peru in the puna agro-ecological zone from 8,000 to 14,500 feet. It is a valuable commodity to the Andean Indians and indigenous peoples in a region where poor and rocky soil, low temperatures and high winds prohibit cultivation of other crops.

Maca has been harvested and used by humans in the Andean Mountains for centuries. Contrary to frequent claims that maca’s cultivation was common in what is today Peru, it has been shown that until the late 1980s, maca has only been cultivated in a limited area around Lake Junin, in Central Peru. Historically, maca was often traded for lowland tropical food staples, such as corn, rice, manioc (tapioca roots), quinoa and papaya. It was also used as a form of payment of Spanish imperial taxes. It is often cited that maca was eaten by Inca imperial warriors before battles. Their legendary strength was allegedly imparted by the preparatory consumption of copious amounts of maca, fueling formidable warriors. After a city was conquered, the women had to be protected from the Inca warriors, as they became ambitiously virile from eating such quantities of maca. This is of course an appealing endorsement for the masculine angle of maca’s recent marketing campaign. Whether or not this oft repeated historical use is actually true has yet to be determined. Those who have studied maca’s history have not been able to locate formal mention of this particular use.

Small-scale clinical trials performed in men have shown that maca extracts can heighten libido and improve semen quality. A small double-blind, randomized, parallel group dose-finding pilot study has shown that Maca root may alleviate SSRI-induced sexual dysfunction. Maca does not affect sex hormone levels in humans, and has not been shown to act on hormones directly. It has been presumed that maca’s hormone-normalizing effects may be due to the root’s unique nutritional profile, which provides optimum levels of nutrients utilized by the body’s endocrine system. In addition, maca has been shown to increase mating behavior in male mice and rats. A recent review states “Randomized clinical trials have shown that maca has favorable effects on energy and mood, may decrease anxiety and improve sexual desire. Maca has also been shown to improve sperm production, sperm motility, and semen volume.”

Maca’s popularity is very much on the increase, as people discover that the plant really does boost libido, sexual function and overall energy.

Maca can help make men more fertile. Men who use maca have been shown to have an increase in libido and healthy sperm. Many fertility supplements have maca in their formulas.

Possible Side Effects
Maca should not be consumed near bed time since it could cause insomnia.

One of the primary ingrediants of SemenRx is Maca. Try SemenRx. You will love it. It has 100% unconditional money back guarantee simply because it works. Get more semen right now. Order right here!

What you can read next 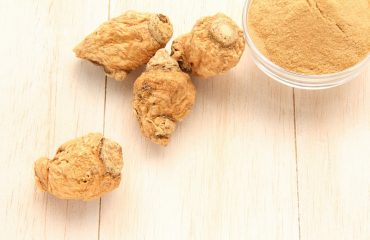